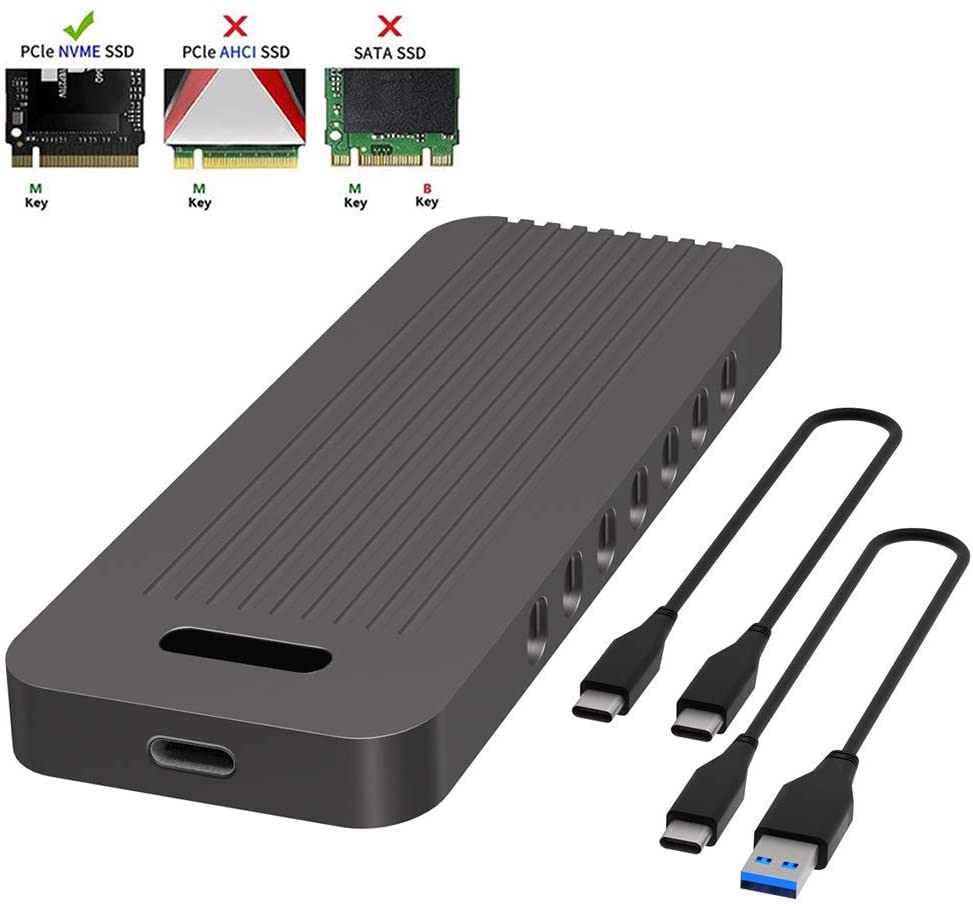 SSDs are becoming the standard in computers, and they are smaller in size but with higher performance rates for data transfer when compared to hard disk drive HDD.

An enclosure needs to improve the performance of older systems, and QNINE NVMe enclosure is proof that SSDs are far better than HDDs. For a longer time than I can remember, I had been looking for a high-performing, high-speed enclosure that will help me carry out my project seamlessly.

I came in contact with several M.2 NVMe enclosure in my quest for the ideal SSD enclosure. It was daunting, but all the stress didn’t matter anymore by the time I stumbled on a QNINE NVMe SSD enclosure.

I fell in love with design at first sight – its sleek design, lightweight, four-sided curved design, compactness, and portability created the special affinity I had for this device.

QNINE comes in a simple and durable design with a lightweight of about 91grams covered in a robust aluminum alloy case that protects it from scrapes, bumps, or drops; moreover, this ascertains a flawless performance. It is also worthy of note that the aluminum alloy case performs a more substantial cooling function.

When I connected the enclosure to USB-A 3.0 GEN 1 interface, I observed that the write data averaged at 370Mbps, but it was so frustrating when I tried to read the same file I had written earlier.

When connected to a USB-C 3.1 GEN 2 port, the onset is always very remarkable. However, it often reduces when almost average, and the speed diminishes until it reaches the zero mark.

Guess what? It stays at zero until I either disconnect the enclosure from the USB port or I restart the system. That’s poor, but I believe the manufacturers will rectify that problem in subsequent ones.

While I ran the benchmark test, I was able to get the following speeds writing to it:

However, the read speeds are almost double the write speeds as I got about 700 Mbps read speeds when connected to the USB-C port on my Dell TB16 dock.

Thermal dissipation is effectively achieved by the two-side vent holes, which is complemented by the aluminum case acting as an effective heat sink with a more substantial cooling function. This helps to realize the SSD’s full potential of high performance.

QNINE NVMe enclosure supports the M.2, NVMe SSD with M key, and comes with output USB A-C, USB C-C, and USB C-A cable ports to enhance secure connectivity. It also supports M.2 devices with sizes within the range of 2230 to 2280.

Although when I read about it, it was said to be compatible with Windows XP/7/8/10 and Mac OS, I had tried it with Linux and it worked too.

Despite its high and respectable performance, the initial reliability seems to suffer after a while of usage. After every 7-8 hours of usage, the QNINE adapter would randomly disconnect from the system, and it only came back after I restarted the system. This was a show spoiler for me.

Another odd thing about this enclosure is that it does not recognize the brand of the SSD used, and this doesn’t allow the use of Samsung disk cloning software for Samsung disk even though it was mentioned on the product website.

I’ll also give the device a ‘thumb down’ because of that weak feature of not recognizing SSD brands.

The installation of the SSD into the enclosure is straightforward. To install the SSD, loosen the screws at the four edges of the device; the circuit board will slide out. Insert the drive, and then push the circuit board back in and tighten the screw. Simple, isn’t it?

However, it is not advisable to open the enclosure too frequently. Aside from the stress of opening and closing it, one of the tiny screws could be misplaced, and that may affect the performance.

Upon plugging it into a USB port, a blue indicator light right next to the USB port is turned on, showing that it is connected. Like any hard drive, if the drive has never been initialized, you need to go to ‘Disk Management’ options on your computer, initialize, and then format the drive before it can be used.

Considering the price and functions of the device, it is worth a try, mainly because it also comes with a 30-day full payment refund policy from Amazon. So, there’s no harm in trying it out, and trust me; you will surely thank me later.

I'm available for partnerships, and other forms of business opportunities. Just click on the button below to get direct access to me.